Vegas! The Show Tickets and Reservations 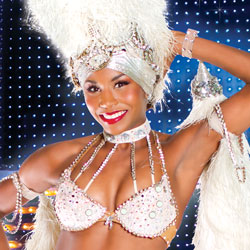 VEGAS! The Show tells the story of the most influential and exciting entertainers who made Vegasâ€¦ Vegas! It’s the best of Las Vegas all on one stage. From Vegas icons like The Rat Pack and Elvis to todayâ€™s hottest performersâ€¦ this award-winning cast, big band orchestra and beautiful showgirls make VEGAS! The Show the biggest stage production on the Strip in 20 years. Shows nightly 7pm & 9pm at Saxe Theater inside Miracle Mile Shops at Planet Hollywood. Also includes FREE ticket to Breakfast with Bugsy (morning breakfast show).

VEGAS! THE SHOW is the story of the most influential and exciting entertainers who made Vegasâ€¦ Vegas!