The Rat Pack Is Back Las Vegas Show Tickets

The Rat Pack Is Back Show Tickets and Reservations 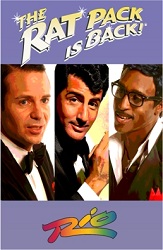 The Rat Pack Is Back

One of the best known eras in Las Vegas entertainment history was undoubtedly the “Rat Pack” days. The escapades of Frank Sinatra, Sammy Davis Jr, Dean Martin and Joey Bishop are legendary in Vegas history and they helped put Las Vegas on an international stage. The stellar cast includes impersonators of Frank Sinatra, Sammy Davis Jr., Joey Bishop and Dean Martin. There’s even a Marilyn Monroe impersonator and performer. The Lon Bronson Big Band Orchestra provides the live music for the entire show.

The Rat Pack is Back! is in its 14th year in Las Vegas and has performed over 5,000 shows. In true Broadway fashion the show has multiple touring versions and has been critically acclaimed in major theatres and performing arts centers in 40 states as well as several foreign countries. It’s a must see for anyone that longs for Vegas the way it used to be!

Tuscany All Suites Hotel and Casino

The Rat Pack Is Back