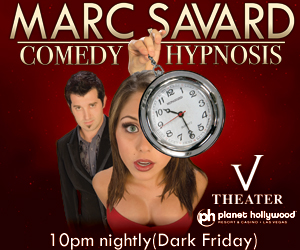 “Holy Hit” says E! Entertainment â€“ Marc Savard Comedy Hypnosis is an energetic mix of comedy, hypnosis and chaos. You can see the show or BE the show! Watch hilarious audience volunteers live on stage as the number one hypnotist in the world, Marc Savard, whips the crowd into a frenzy. It’s the wildest and funniest show on the Strip. Saturday-Thursday, 10pm. DARK FRIDAY Ages 18+ only. Also includes FREE ticket to Breakfast with Bugsy (morning breakfast show).