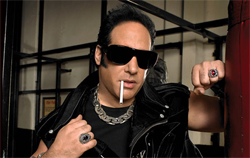 Performing at Vinyl at the Hard Rock Hotel and Casino, Andrew Dice Clay is putting the SIN back in the CITY with his infamous stand-up act. Andrew Dice Clay has made a career out of being the most dangerous and outrageous comic of his time. He has shocked audiences and broke the rules with a never-before-seen style of hardcore comedy â€¦ and he ain’t about to change it now! His rise to fame has been called meteoric and unparalleled with countless sold-out arena tours across the country. See him like you’ve never seen him before â€¦ The Undisputed Comedy King â€¦ Andrew Dice Clay!