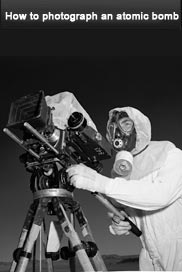 Located just minutes from the Las Vegas Strip, the Atomic Testing Museum portrays world history through varied representations of the story of the Nevada Test Site and its programs. Featuring interactive elements for personal exploration, theatrical devices, first-person narratives and environmental re-creations, many not seen before, the museum also presents multiple viewpoints expressed in stunning graphics and multi-media presentations.

The museum’s parent organization, Nevada Test Site Historical Foundation was founded in 1998 to preserve the legacy of the Nevada Test Site, with a mission to document and interpret the unique history associated with 50+ years of nuclear weapons research and testing conducted at the Test Site.

The Atomic Testing Museum is open to the public.